Pasco-Hernando State College’s (PHSC) spring commencement, held on Wednesday, May 1, included a special honoring of Pasco County Tax Collector Mike Fasano. Fasano, who was the Charge to the Graduates speaker for the afternoon ceremony, was awarded an honorary Bachelor of Applied Science in supervision and management and inducted into PHSC’s Legislative Hall of Fame.

Mike Fasano began his public service career when he was elected to the Florida House of Representatives in 1994, representing parts of both Pasco and Hernando Counties. He eventually rose to the position of House Majority Leader. During the historical 2000 presidential election and subsequent recount, he was the “face” of the Florida Legislature on national and international media outlets.

Following an eight-year term in the House he ran for a seat in the Florida Senate. He eventually served in that chamber for 10 years, representing Pasco, Hernando, Citrus and Pinellas Counties. Fasano ultimately achieved the position of President Pro-Tempore of the Senate. He returned to the Florida House in 2012 and remained until he was appointed by then Governor Rick Scott to the open seat of Pasco County Tax Collector in 2013. Fasano continues to serve in that capacity to this day.

Fasano spent his 19-year legislative career crafting and sponsoring legislation that addressed issues ranging from health care, education, criminal justice, insurance reform and a host of other issues. He also worked to ensure that adequate funding was made available to local and state-level organizations that provide for the basic needs of lower-income Floridians, those who are victims of violent crime, and individuals/ families without means or ability to help themselves.

The leadership and support provided to PHSC by Fasano during his tenure in the Florida Legislature was stellar. The college benefitted greatly from his leadership to acquire nearly $116 million dollars to construct two of PHSC’s campuses, the Spring Hill Campus, and the Porter Campus at Wiregrass Ranch in Wesley Chapel. Additionally, Fasano was instrumental as the Appropriations Chair in acquiring the necessary funding to construct the Conference Center and classroom building S on the West Campus. For a period of nearly 20 years (1994-2012), no other legislator within the region had the impact on the growth of PHSC as Senator Fasano.

During the two spring commencement ceremonies, approximately 433 degrees and certificates were conferred at the ceremonies. An estimated 998 spring graduates were eligible to participate. 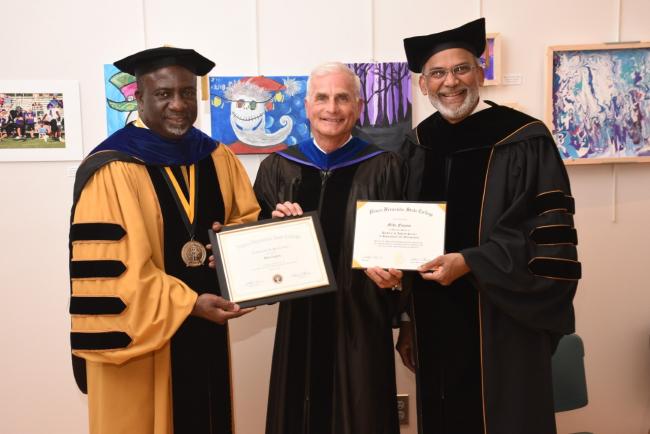