Pasco-Hernando State College (PHSC) will host winter commencement on Tuesday, December 11, in the Physical Fitness Center at the West Campus in New Port Richey, 10230 Ridge Road. Two commencement ceremonies will honor graduates earning bachelor’s and associate’s degrees, certificates and diplomas. The morning ceremony will begin at 10:30 a.m. and the afternoon commencement will begin at 3 p.m. The event live stream link will be available at phsc.edu.

This year’s fall graduates include many ambitious and accomplished students, and some who have encountered adversity in pursuit of a higher education.

Hailey Skoglund, 17, of Spring Hill, will earn her AA degree. Skoglund is a dual enrollment student and a senior at Nature Coast Technical (NCT) High School where currently, she is at the top of her class. She has participated in the swim team, student government and debate team. She is the founder of the NCT math team and music club. At the college, Skoglund is an active member of Phi Theta Kappa (PTK) and Psi Beta honor societies. Skoglund left NCT after her sophomore year, to attend classes at PHSC with her sister and best friend, Rahne. “Rahne served as my sighted guide and my eyes,” said Skoglund, who is blind. The two sisters worked side-by-side to complete AA degrees and will walk across the stage together. Skoglund is a first violinist in the New Port Richey Symphony Orchestra, the official violinist for the Republican Party of Florida and performs at weddings, fundraisers, and more. She volunteers at Oak Hill Hospital providing musical therapy for critically ill patients and performs frequently at the VFW for Marine Corps veterans. Skoglund received a presidential award in Geometry and Algebra 2. She will pursue a STEM degree at Florida Polytechnic University where she will study business analytics. “My role models have shown me that I do not need to be naturally “good at math” to find success. I learned that with a little grit, hard work, and a positive outlook, anything is possible, even a blind girl doing calculus!” said Skoglund.

Felix Jimenez, 29, of Wesley Chapel, will earn an AS in network systems technology. Jimenez emigrated to the U.S. from the Dominican Republic in May 2012. “Seven years ago, I never imagined I would be living in the United States and graduating with my AS degree,” said Jimenez, who did not let English being his second language defeat him in furthering his education. In addition to being a student, Jimenez works full time and is a husband and a father to a four-year-old and an eight-month-old. Jimenez learned time management skills to help balance work, school and family, which included designating quality family time. “After my children would go to sleep, I would study. When I was not working, I would be studying. However, one day a week, I did not study. One day a week, I focused on being a father and a husband without distractions,” said Jimenez, who believes with sacrifice comes great reward. Jimenez also is an active member of his church and its outreach leadership team. He plans to work in the IT field and continue his education obtaining Cisco certifications to become a network engineer.

Keilah Rodriguez, 28, of Brooksville, will earn an AA. Rodriguez is a student ambassador, peer mentor, student worker, and president of PTK. A mother of three boys, Rodriguez works part-time at a local retail store. She has a goal of becoming an International Lawyer for Human Rights. “My passion and commitment to justice stems from growing up in abusive environments where I had to persevere through difficult obstacles such as foster care and a group home. Five years in the Army (2007-12) also opened my eyes to unjust situations that occur in the world,” said Rodriguez. Rodriguez endured through her studies during the loss of her three-month-old niece, then her younger brother. “When my brother committed suicide, I felt I failed as his protector. I had no idea how to handle the feeling of failure, loss, and inadequacy,” said Rodriguez, who now uses her role as a student leader to guide students to stay focused through negative, difficult experiences while maintaining a positive outlook. Rodriguez is a recipient of the college’s 2018 Dr. Felisha R. Barker Outstanding Student Leader of the Year Award. She will pursue a bachelor’s degree in philosophy as a lead-in to law.

Brandon Swanbom, 22, of Land O’ Lakes, will graduate with an AA and an AS in aviation, professional pilot. Swanbom is a Staff Sergeant for the Mississippi Air National Guard (U.S. Air Force) since 2014. He holds the position of C-17 Loadmaster in the 183rd Airlift Squadron. “My greatest challenge as a student was finding a program that works with me while I am deployed flying missions overseas nearly every month, until I settled in at PHSC,” said Swanbom. “The PHSC instructors have been understanding and worked with my situation which helped tremendously.” Swanbom is the founder and president of the PHSC Flight Club and a recipient of a 2018 veteran exemplary service award from PHSC Student Life and Leadership. Swanbom, when not on a mission, is a commercial multi and single engine instrument rated pilot. He hopes to become a C-17 pilot in his current squadron and a commercial airline pilot in the future. Swanbom is enrolled in PHSC’s BAS degree program with a focus in office administration.

Christine Roe, 35, of Weeki Wachee, will earn her AS in nursing. Roe is a member of Psi Beta, PTK, Student Veterans Association and Nightingale Nurse Club. She is the Florida Nursing Students Association 2017-2018 Region 4 Director and Legislative Chair, the 2018-19 student liaison for Florida Nurses Political Action Committee, and a member of numerous nursing associations. Roe has applied to the PHSC BSN program. She is a US Navy Veteran: Quartermaster Second Class, having received Navy and Marine Corps Commendation Medal and Navy and Marine Corps Achievement Medal. She participated in Operation Enduring Freedom and Operation Inherent Resolve campaigns, earned recognition and commendation letters. She volunteered with Veterans Stand Down in San Diego. “I wanted to give back in a meaningful way and to be a part of something bigger than myself,” said Roe, whose naval experience has helped her excel as a peer mentor and in her work as a nursing tutor at the college.

Marie Gill, 60, of Beverly Hills, Fla. will earn her AA. She is a mother of seven children, grandmother of 10 and CEO of two businesses—a cleaning service and music promotion. Gill overcame her fear of returning to college as an older student, and served as treasurer and president of SGA, a peer mentor, student ambassador and a member of PTK Alpha Delta Epsilon and Sigma Kappa Delta honor societies. She is a recipient of the PHSC Dr. Felisha R. Barker Outstanding Student Leader Award and is a student worker in the PHSC LIFE program. Gill is a precinct committee woman in her district and volunteers at Shady Hills United Methodist Church in Pasco County as an assistant secretary, and tutor for T.A.B.E. and GED students. She lives by the motto Each One. Teach One. Bring One. (her granddaughter is now attending PHSC) and wants “to be remembered by what I brought into the world, not what I bought from the world.” Gill is considering the pursuit of a bachelor’s degree in human services or counseling.

Marisa Vaccaro, 22, of Port Richey, is a first-generation college student and the youngest in her family. She will earn a BAS in organizational administration. Vaccaro is a member of Psi Beta honor society. Recently, she was hired for a part-time position in the PHSC financial aid office, where she worked as a student-worker for three years while pursuing her degree.

Jonathan Buzin, 27, of Tarpon Springs, will earn his AS. Buzin struggled as a young student at PHSC prior to entering the Marine Corps, where he learned discipline and gained experience that made him a better student when he returned to the college years later. Buzin is a certified student leader, vice president of Legal Eagles, a parliamentarian of PHSC Student Veterans of America, and member of CRU club, Synergy sociology club, and Rotaract Club. Additionally, Buzin is a member of the Trinity-Odessa Toastmasters Club. He is an intern as a Catholic schoolteacher for adults within the Diocese of Saint Petersburg and volunteers at several other organizations. Buzin will attend Saint Leo University as a dual major in cybersecurity and economics, before pursuing an MA in Catholic theology.

Souzana Thalji Alshorof, 21, of New Port Richey, a native of Jordan, will earn an AA. She is a member of Psi Beta and PTK honor societies. Alshorof, who studied English at the University of Jordan, accompanied her four younger siblings to the U.S., to become their chaperone while getting a U.S. education. Alshorof is passionate about learning. “At the beginning, college was difficult because English is not my first language. However, I did not let that stop me. Overcoming the language barrier and shouldering full responsibility of my siblings, without my parents here, were the biggest obstacles for me,” said Alshorof, who plans to pursue a bachelor’s degree in applied English and linguistics when she returns to Jordan. 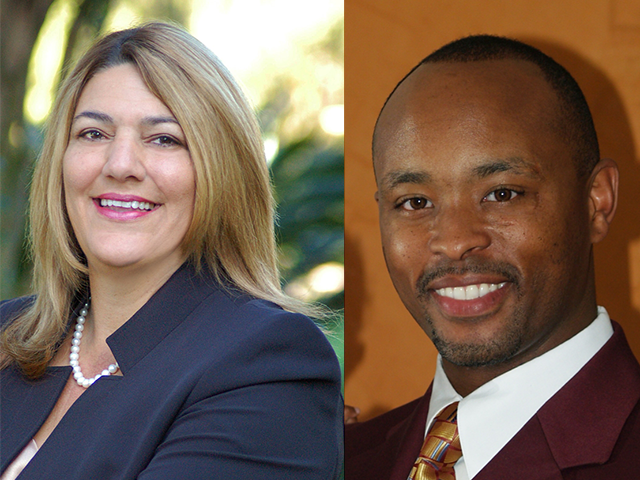